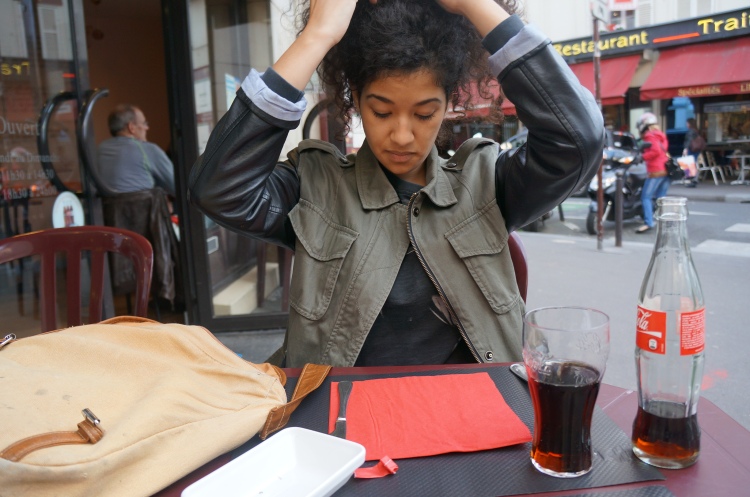 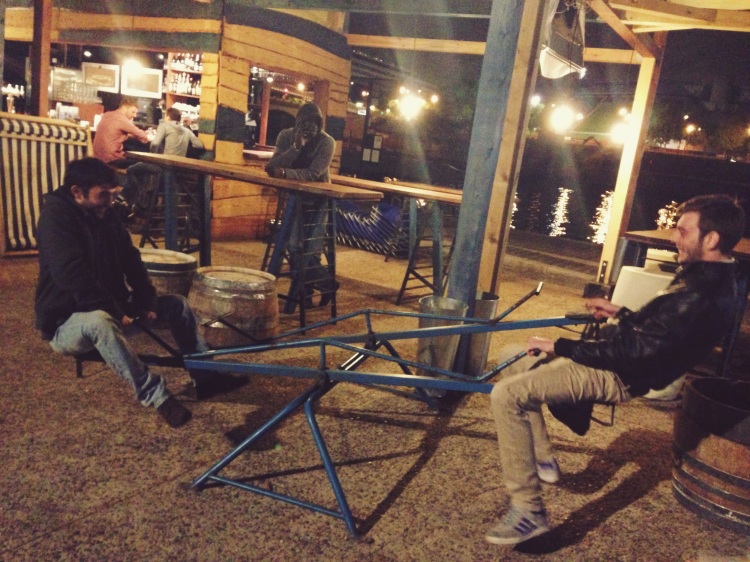 Recently I’ve been getting into Fauve.  Fauve is a French music group consisting of five main members.  If you listen to their stuff, you’ll see why I would find it hard to describe their style.  Basically, they make simple (but dope) beats and then speak over them, sometimes singing as well.  I had heard of them earlier this summer when FNAC hosted a free four-day concert in front of Hôtel de Ville in Paris.  As you can imagine, I was extremely jealous of the Parisians that had the chance to attend – Hôtel de Ville c’est mon endroit préféré!  Instead, I spent all four nights in bed browsing the #hoteldeville tag on Instagram, watching videos of the performances and double tapping any photo that featured the magnificent Hôtel de Ville itself.  Bref.  It was only this past weekend that I actually heard Fauve for the first time.  A friend from Paris came to visit (Andrew), and played their EP “Blizzard” for me while in the car on the way to the One Direction concert.  I was instantly hooked.

This isn’t Paris, but I really love this shot from the 1D concert.

I’ve had Fauve’s EP on repeat since Saturday.  It’s Thursday.  Their music is calming, but catchy à la fois.  Their lyrics are insanely brilliant.  And to top it all off, c’est tout en français.

I am completely and crazily in love with the French language.  It is so beautiful.  I learned so much about the pronunciation in the phonetics classes I took while I was living there.  Things like the French ‘r’, the difference between “ou” and “u”, the difference between “en”, “un”, “in”, and “an”, liaisons, enchainements, the rhythm of a sentence  – tout ça.  It’s hard, yo!  I’ve definitely improved, but in no way am I anywhere close to sounding like une vraie française.  So for now, I’ll keep practicing, and I’ll continue to listen to Fauve in my car with a huge smile on my face in awe of the effortlessness with which the French speak. 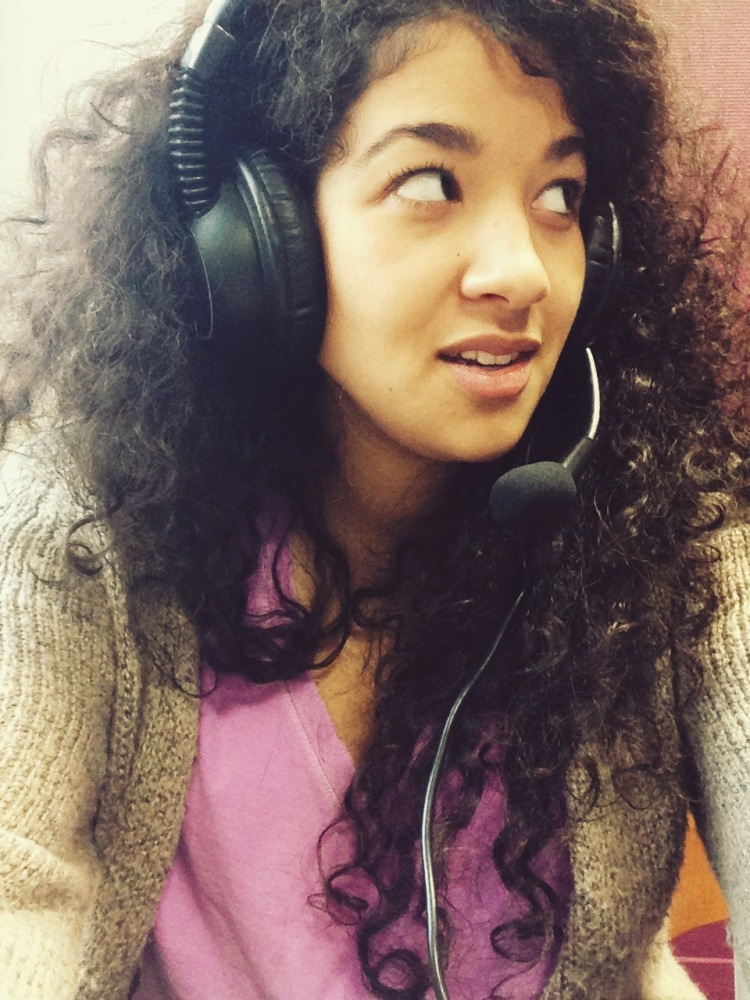 Texting when I should be speaking….

I grew up in a very small town in Michigan.  Calling it a ‘town’ might even be too generous – I think it was technically just a ‘township’.  Anyway, it stretches across a vast three miles, and one thing you won’t ever see is any form of public transportation.  No taxis, no buses, and absolutely no underground train system.  Oh, I’m sorry, I lied.  There’s the little bus that takes the old people to and from the local retirement home.

In the months leading up to my big move to Paris, I tried to familiarize myself with Paris’s metro system.  After a day or two of copying what I now know are the RER lines (i.e. not actually any of the 16 metro lines that I would end up using daily), I gave up feeling overwhelmed trying to navigate this intricate maze of underground trains.  I had had experience with metro systems before (London, New York, Milan), but those were only during short vacations.  I wasn’t actually living in the city and in no way did I have any of it memorized.  Also on these vacations, it was usually someone else who took the initiative to guide the rest of us and I just tagged along, rarely taking note of where we were.  So naturally I was worried that it would take me months to understand the complicated ways of the Parisian underground.

Turns out, I’m a natural.

Within a week I was metro-ing alone, no longer using a map or the Paris metro app on my phone.  French people would even stop and ask me for help with directions!  I will admit that on more than one occasion I did accidentally give wrong directions to lost metro users, but I probably never saw them again.  I hope.

I was living in the 15th arrondissement.  My metro was Pasteur (and I guess Sèvres Lecourbe as well, but Pasteur was a tiny bit closer).  I loved this location.  If you enter through Pasteur, you have access to lines 6 and 12.  Line 6 is, in my opinion, the best metro line.  It’s “une ligne aérienne”, which means it occasionally comes above ground, revealing the most gorgeous views as it snakes between les rues de Paris.  The journey between Pasteur and Passy is truly magical.  Especially the seconds between Bir-Hakeim and Passy as it goes over the Seine and you get the most amazing view of la tour Eiffel and le Sacré-Cœur way off in the distance.

Line 6 will get you to the Eiffel Tower, Place du Trocadéro, and the Arc de Triomphe.  Whenever I was feeling upset or depressed, I would take line 6 from Pasteur to Trocadéro and walk down from Place du Trocadéro to the tower, and then walk next to the metro all the way home.  It was a beautiful promenade that never failed to lift my spirits. 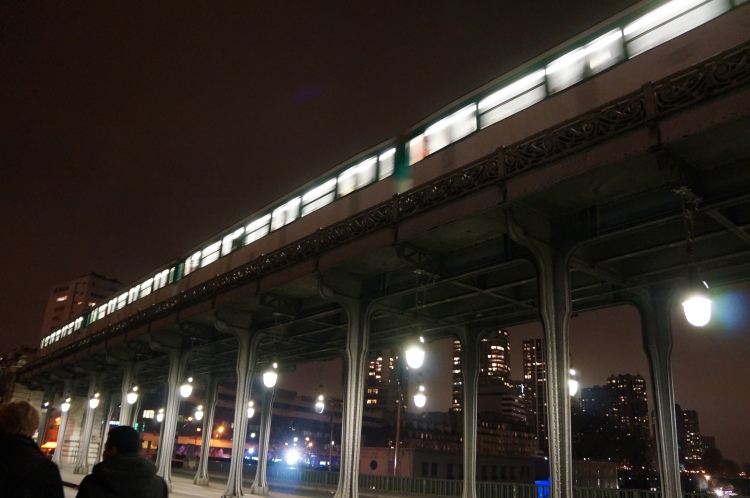 The only thing that annoys me about taking the metro is this: no one smiles.  If I’m talking with a friend and start laughing, people start dishing out the dirty looks.  I usually just respond by saying “C’est pas interdit de sourire, hein…” and then they piss off.

Compared to metro systems I’ve used in other cities, Paris’s is definitely the most user-friendly.  Everything is signposted, the trains are almost always on time, and the lines are color-coded !  Line 6 is a cute mint green color : )  New York’s metro is the absolute worst, hands down.  Uptown, downtown, express trains – what??  Using the Paris metro was a treat after using the New York metro.  Just don’t be alarmed if you see a group of homeless people camping out at the bottom of the stairs in Montparnasse, or a man peeing against the wall, or a drunk guy spitting up on the back of a metro seat.  The smell can also get pretty intense.  But BESIDES all of that, I love the metro ! 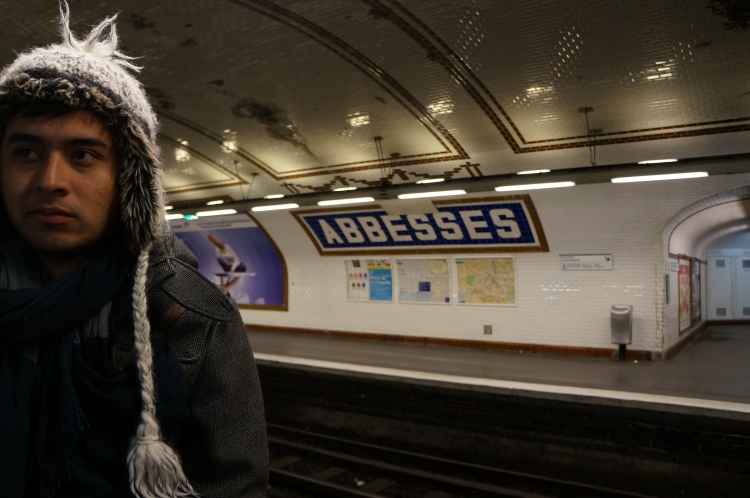 I also mentioned the use of buses as public transportation.  While in Paris, I probably took the bus about six times.  I steered clear of it because the bus routes just seemed way too confusing (same reason I didn’t want to learn the metro lines), but I think when I go back to Paris I’ll use it more.  When you take the bus, you’re above ground and can actually see where you’re going.  Although I love the metro, I love Paris more, and it’s silly to spend half of the day underground when there’s so much beautiful architecture to take in!

I’m also going to make use of the Vélib’s when I move back to Paris.  I only used them twice.  Once to sit and eat milk and cookies with German.  The second time I was riding on the back of German’s because I was breaking in my new shoes and my feet were killing me.  I do not recommend trying this – I was scared for my life.  Trust me when I say, there is only room for one person on a Vélib’.

More pictures of the metro, cause this post needs it, right? 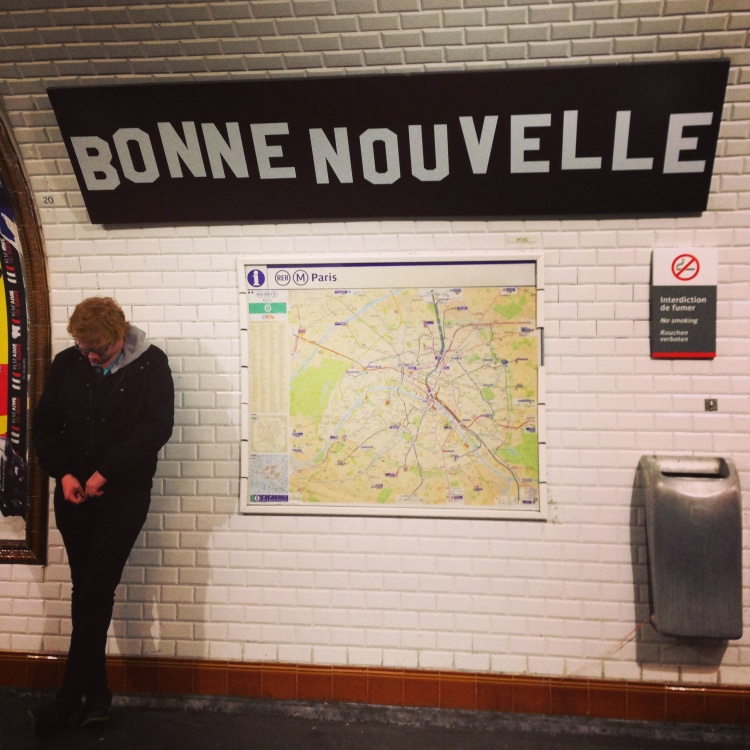 Andrew modeling on the other side of the tracks.